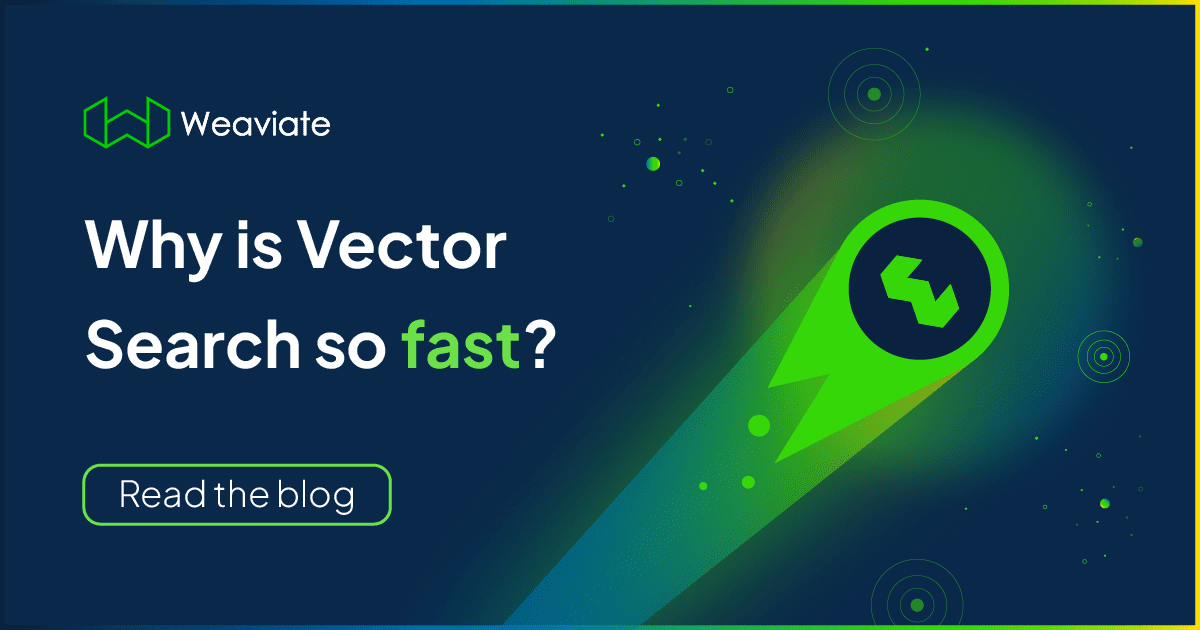 Why is this so incredibly fast?​

Whenever I talk about vector search, I like to demonstrate it with an example of a semantic search. To add the wow factor, I like to run my queries on a Wikipedia dataset, which is populated with over 28 million paragraphs sourced from Wikipedia.

For example, I can ask: "What is the tallest building in Berlin?", and the Vector Search engine (in the case of my demo – Weaviate) responds with "Fernsehturm Berlin".
You can try it for yourself by following this link, which is already pre-populated with the above question. Press the play button, to see the magic happen.

Here is the thing, finding the correct answer in a gigantic repository of unstructured data is not the most impressive part of this demonstration (I mean, it is very impressive), but it is the 🚀 speed at which it all happens. It takes a fraction of a second for the UI to show the results.

We are talking about a semantic search query, which takes milliseconds to find an answer in a dataset containing 28 million paragraphs. Interestingly enough, it takes longer to render the results than it takes the Vector Search engine to find the answer.

Note, a semantic search is unlike a regular keywords search (which matches keywords like-for-like), but instead, we are searching for answers based on the semantic meaning of our query and data.

The inevitable question that follows up this demonstration is always:

Why is this so incredibly fast?

What is a vector search?​

To answer this question we need to look at how vector search engines work.

Vector search engines index data, unlike other databases, based on data vectors (or vector embeddings). Vector embeddings capture the meaning and context of data, usually predicted by Machine Learning models.

At the time of entry/import (or any significant changes to data objects), for every new/updated data object, vector search engines use Machine Learning models to predict and calculate vector embeddings, which then are stored together with the object.

Every data object in a dataset gets a vector

There are many different distance metrics, like cosine similarity and Euclidean distance (L2 distance).

In a similar fashion, whenever we run a query (like: "What is the tallest building in Berlin?"), a vector search engine can also convert it to a "query" vector. The task of a vector search engine is to identify and retrieve a list of vectors that are closest to the given vector of your query, using a distance metric and a search algorithm.

This is a bit like a game of boules – where the small marker (jack) is the location of our query vector, and the balls (boules) are our data vectors – and we need to find the boules that are nearest to the marker.

One way to find similar vectors is with a simple k-nearest neighbors (kNN) algorithm, which returns the k nearest vectors, by comparing every data vector in the database to the query vector.

In our boules example (as illustraded below), with 6 boules, the kNN algorithm would measure the distance between the jack and each of the 6 boules on the ground. This would result in 6 separate calaculations. 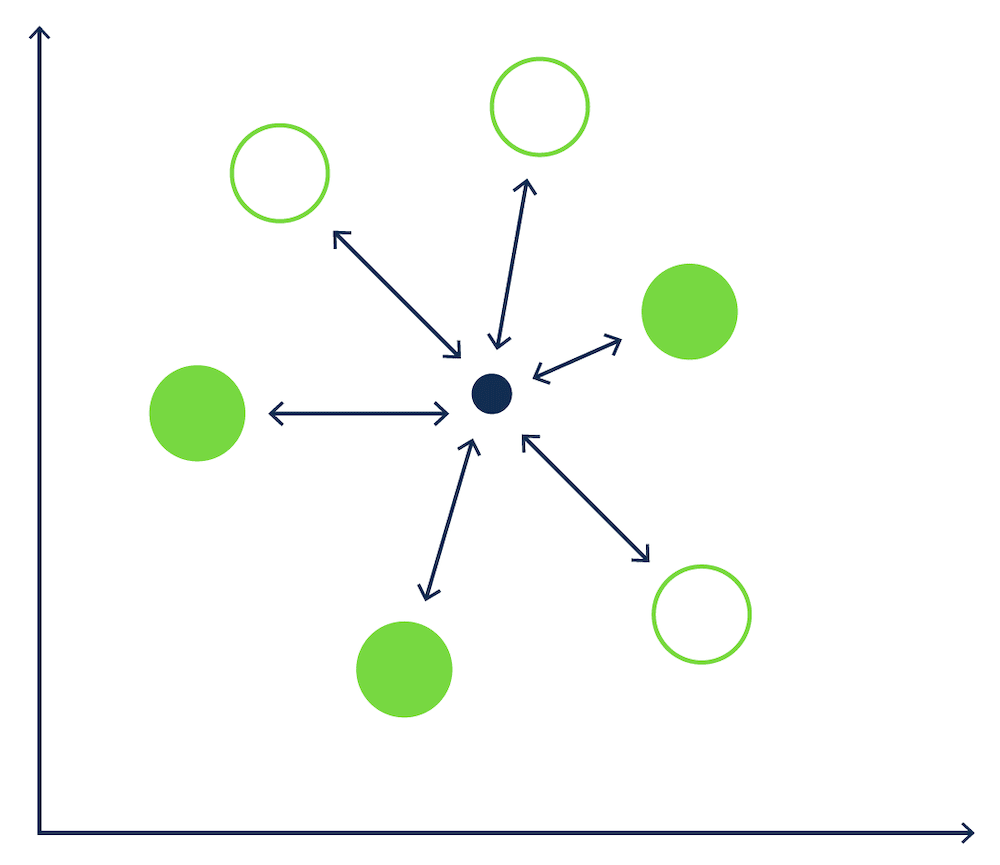 Comparing a search vector with 10, 100, or 1000 data vectors in just two dimensions is an easy job. But of course, in the real world, we are more likely to deal with millions (like in the Wikipedia dataset) or even billions of data items. In addition, the number of dimensions that most ML models use in semantic search goes up to hundreds or thousands of dimensions!

The brute force of a kNN search is computationally very expensive - and depending on the size of your database, a single query could take anything from several seconds to even hours (yikes😅). If you compare a vector with 300 dimensions with 10M vectors, the search engine would need to do 300 x 10M = 3B computations! The number of required calculations increases linearly with the number of data points (O(n)) (Figure 2). 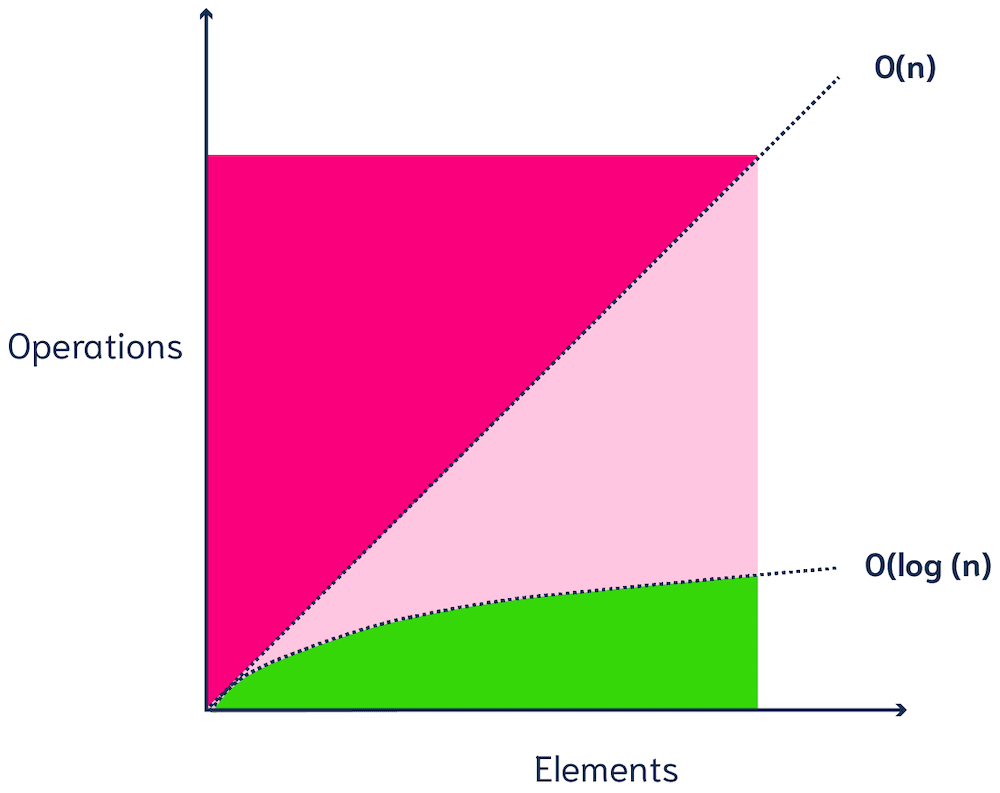 In summary, kNN search doesn't scale well, and it is hard to image using it with a large dataset in production.

Instead of comparing vectors one by one, vector search engines use Approximate Nearest Neighbor (ANN) algorithms, which trade off a bit of accuracy (hence the A in the name) for a huge gain in speed.

Note that most vector search engines allow you to configure how your ANN algorithm should behave. This lets you find the right balance between the recall tradeoff (the fraction of results that are the true top-k nearest neighbors), latency, throughput (queries per second) and import time.
For a great example, check Weaviate benchmarks, to see how three parameters – efConstruction, maxConnections and ef - affect recall, latency, throughput and import times.

Examples of ANN methods are:

Which algorithm works best depends on your project. Performance can be measured in terms of latency, throughput (queries per second), build time, and accuracy (recall). These four components often have a tradeoff, so it depends on the use case which method works best.

So, while ANN is not some magic method that will always find the true k nearest neighbors in a dataset, it can find a pretty good approximation of the true k neighbors. And it can do this in a fraction of the time!

Weaviate is a great example of a vector search engine that uses ANN algorithms to offer ultra-fast queries. The first ANN algorithm introduced to Weaviate is a custom implementation of Hierarchical Navigable Small World graphs (HNSW). 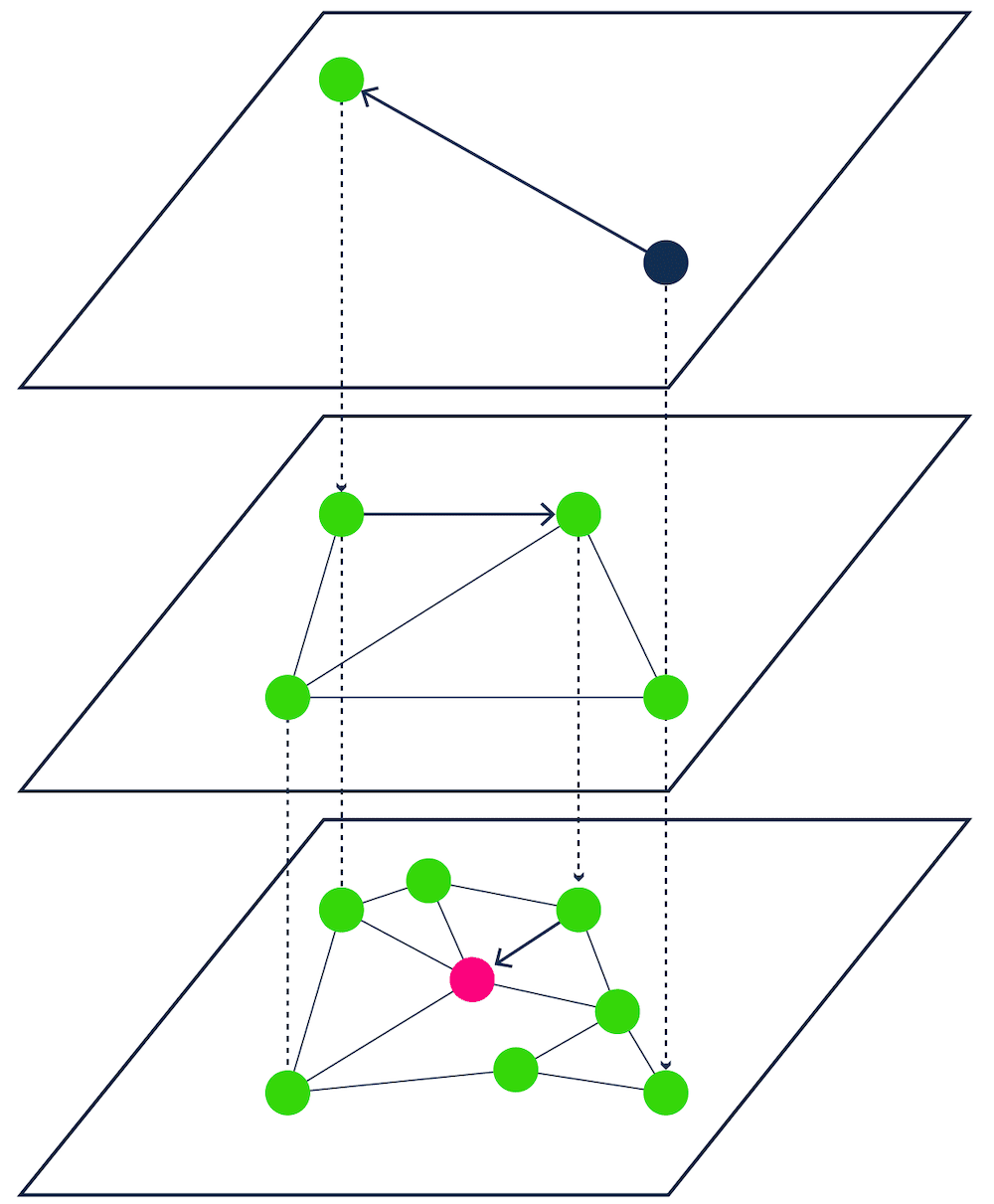 Check out Weaviate ANN benchmarks to see how HNSW performed on realistic large-scale datasets. You can use it to compare the tradeoffs between recall, QPS, latency, and import time.
You will find it interesting to see, that Weaviate can maintain very high recall rates (>95%), whilst keeping high throughput and low latency (both in milliseconds). That is exactly what you need for fast, but reliable vector search!

Of course, there is a lot more going on in a vector search engine that makes it so efficient. But that is content for another article.😉

The Weaviate Core team is currently working on research and implementation for other ANN algorithms. We are going to publish some of our findings in the next couple of weeks. So, stay tuned for more content on the topic.

Until then, you can: