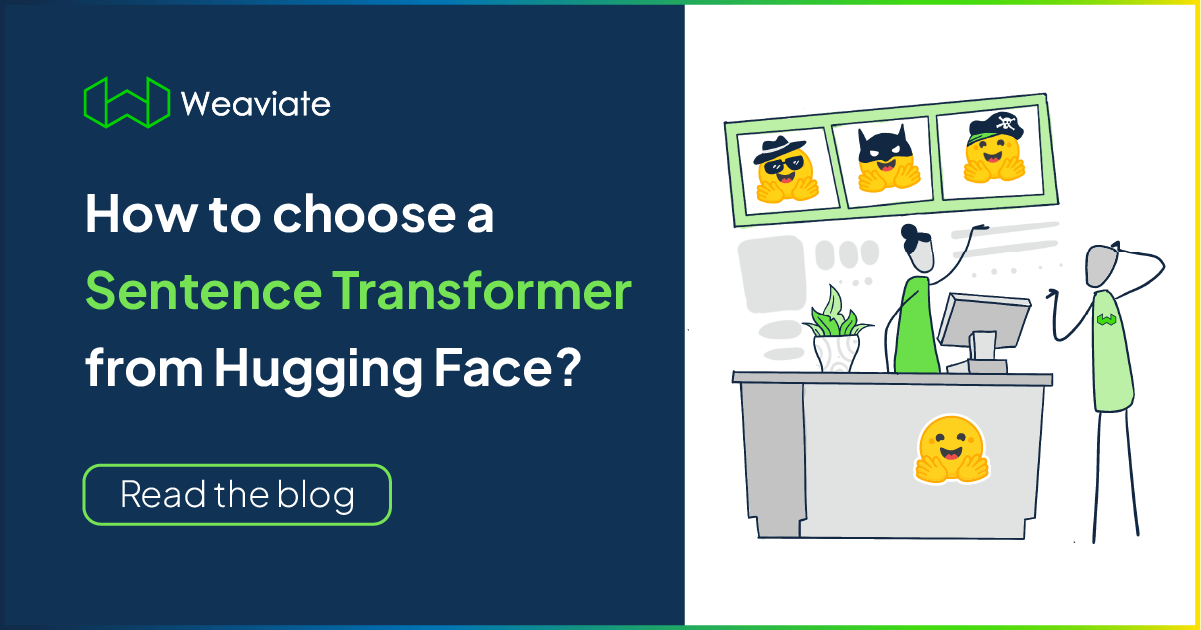 Weaviate has recently unveiled a new module which allows users to easily integrate models from Hugging Face to vectorize their data and incoming queries. At the time of this writing, there are over 700 models that can be easily plugged into Weaviate.

You may ask: Why are there so many models and how do they differ?
And more importantly: How to choose a Sentence Transformer for Semantic Search?

There are too many models to summarize in one flowchart. So instead, we will describe factors that differentiate these models and give you tools to choose the perfect model for your use case. 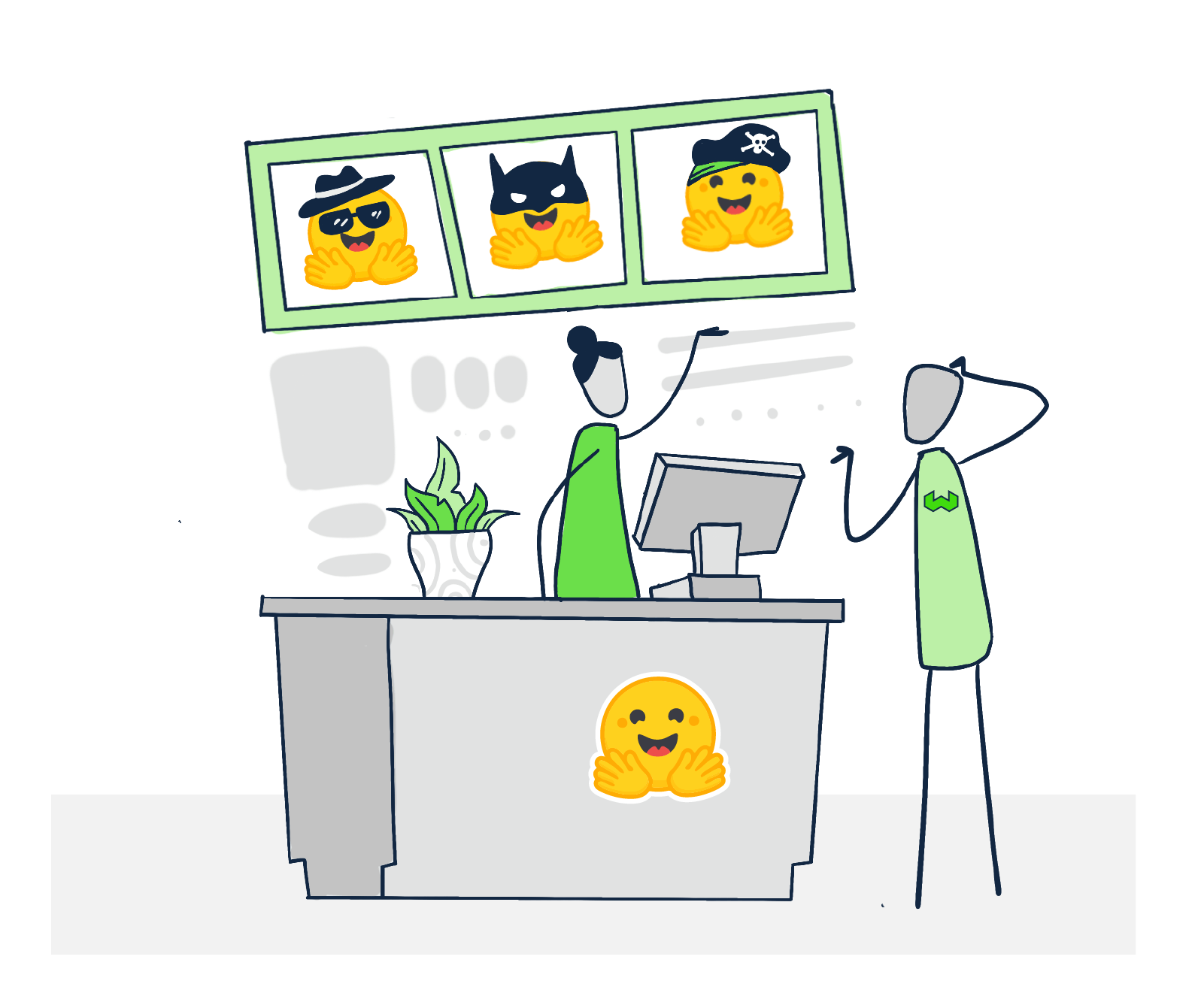 Not too long ago, Deep Learning models were typically differentiated based on architectural decisions. For example, ResNet differs from DenseNet based on how frequently they implement skip connections between layers. Fast forward to today, the Deep Learning community has fallen in love with attention layers and the transformer network architecture. Transformers mostly differ between encoder, decoder, and encoder-decoder designs. They additionally vary at the level of details such as the number of layers and hidden dimension sizes. However, the consideration of these kinds of details is mostly a thing of the past thanks to the beauty of the Hugging Face transformers library and the success of this particular model architecture. These details can generally be summarized into the "parameter count" metric, of which most sentence transformers contain about 22 million parameters.

These days, neural nets differ from each other more so based on what they were trained on with respect to data -- as well as some subtleties with how they were trained, which we will save for a future article. This article will focus on 4 key dimensions:

Domain differences are very common in Natural Language Processing (NLP), such as the difference between Legal Contracts, Financial Statements, Biomedical Scientific Papers, Wikipedia, or Reddit Conversations to give a few examples.

For every model, Hugging Face displays a list of important color-coded details, such as:

So, if we look at two Deep Learning models, we can see that dangvantuan/sentence-camembert-large was trained on stsb_multi_mt, which is a French dataset.

While sentence-transformers/all-MiniLM-L6-v2 was trained on several datasets in English.

To put it as bluntly as possible, what makes dangvantuan/sentence-camembert-large better at French sentence embeddings than sentence-transformers/all-MiniLM-L6-v2 is that… it was trained on French sentences! There are many examples like this, models trained on biomedical text, legal documents, or Spanish are generally going to perform better when tested on that domain compared to models that haven't been explicitly trained for the domain.

Note that these tags are a part of Hugging Face’s model cards, an impressive effort to continue advancing the organization of Machine Learning models. At the time of this writing, model cards still rely on manual tagging. It may be the case that the developer uploading the model hasn’t filled out these details. If you are new to Hugging Face, please consider annotating your uploaded models by adding a model card - YAML sections in the README.md, like this: 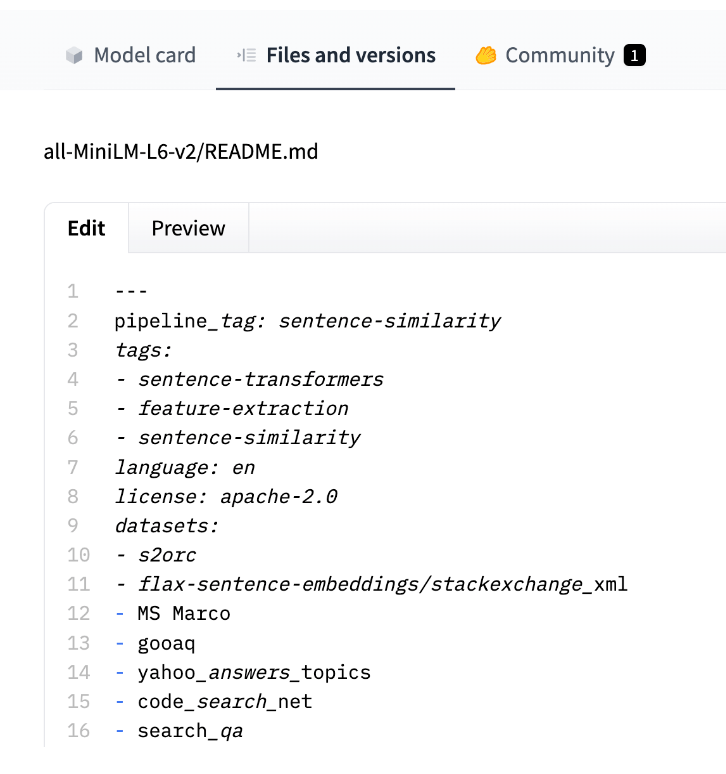 A large part of the beauty of Weaviate's integration with Hugging Face is that anyone can upload their models to Hugging Face and use them in Weaviate's vector search engine. For example, I am doing research on COVID-19 literature, so I have fine-tuned a model on CORD-19 title to abstract matching and uploaded it to CShorten/CORD-19-Title-Abstracts.

As a quick recap, Domain largely describes the high-level notion of what the dataset is about. In addition to Domain, there are many Tasks used to produce vector embeddings. Unlike language models, in which most models use the training task of "predict the masked out token", embedding models are trained in a much broader set of ways. For example, Duplicate Question Detection might perform better with a different model than one trained with Question Answering.

It is a good rule of thumb to find models that have been trained within the same domain as your use case. Another important consideration for this is the task used to label the data and whether this labeling aligns with the task of interest or not. If we have two models trained on French Legal Contracts and we are looking to develop a Question Answering system… ideally it would be best if the HuggingFace model has not only been trained on French Legal Contracts, but Question Answering as well.

Supervised Learning datasets play a prevalent role in Deep Learning applications, especially for many of the Sentence Transformer models. A dataset labeled for Question Answering is very different from Image Classification, or even Duplicate Question Detection. 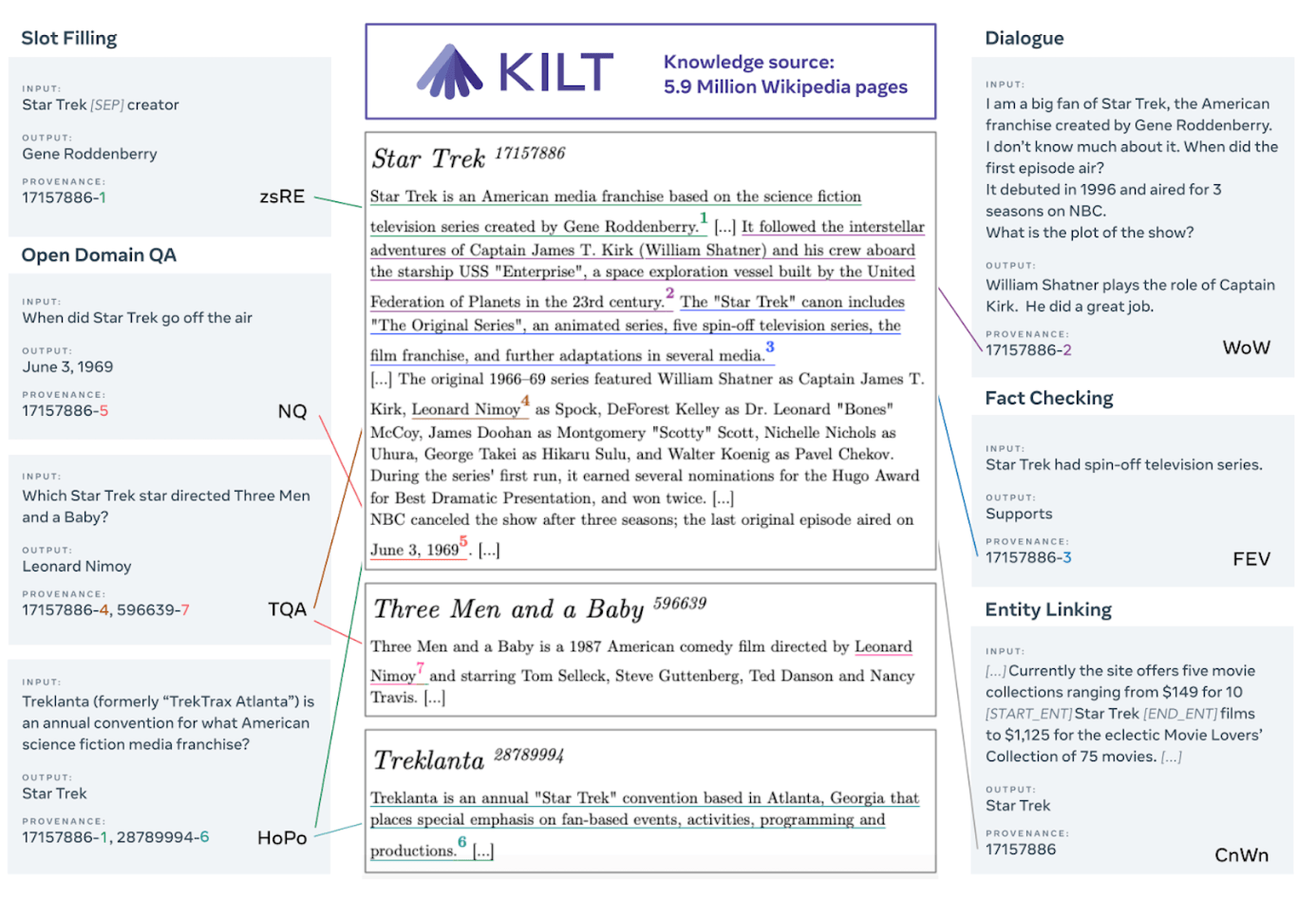 These datasets can be simplified into 2 categories: (1) Exact Semantic Match and (2) Relational Inference. I believe the adoption of these categories can simplify the organization of text datasets used in embedding optimization.

Exact Semantic Match is designed to encapsulate datasets like STS and Quora Question Pairs, as well as the miscellaneous Mono- and Multilingual Paraphrase datasets.

I believe the core difference between Exact Semantic Match and Relational Inference is whether the task requires some level of intermediate relational processing. For example, in the Natural Language Inference task, it isn’t enough to say "Bowen likes Ice Cream" is equivalent to "I saw Bowen eating Ice Cream". The model must learn an intermediate function of entailment. These intermediate functions must be learned for Natural Language Inference, Fact Verification, Question Answering, and so on more so than tasks like aligning English to French translations or detecting Question paraphrases.

These two high-level categories are a good starting place for taxonomizing these datasets. However, there are still noticeable differences within each category. For example, what makes Question Answering different from Fact Verification for evaluating the quality of a Sentence Transformer? Quite simply, questions have a unique style compared to facts. So while the retrieval task is similar in returning the most suitable answers or evidence, the slight difference in question versus stated fact will have an impact on performance. We advise readers to look for these subtle differences when choosing a Sentence Transformer for their use case.

The most common Self-Supervised Task heuristic is to use neighboring passages as positive pairs. This works pretty well since most neighboring passages tend to be semantically related. As shown in the 1B training pairs example below, there are many natural cases of this on the Internet as well – such as Reddit post-comment pairs or Stack Exchange question-answer pairs.

So generally when choosing a Sentence Transformer for your use case, you want to find the best alignment between Domain and Task with one of the many pre-trained models. Another key element to understand when looking at the datasets used in training is the Scale. Deep Learning models generally benefit from larger-scale datasets, but this may come at the cost of noisy labeling – especially when the model size is not scaled up with the dataset.

In Deep Learning, scale typically refers to larger models, but here we are using a scale to describe the size of the dataset. But of course, these factors are entangled with one another. At the time of this writing, we generally would need to scale up the model size to take advantage of a larger dataset. Thus, if we are constrained by budget – a high-quality dataset becomes much more important.

Something I found very interesting while researching the Scale of embedding datasets for this article, was the Hugging Face community event to "Train the Best Sentence Embedding Model Ever with 1B Training Pairs" led by Nils Reimers. Of the 1 billion pairs, some of the following sub-datasets stood out to me: Reddit Comments from 2015-2018 with ~730 million pairs! S2ORC Citation pairs at ~116 million, WikiAnswers duplicate question pairs at ~77 million, Stack Exchange pairs at ~25 million, and some labeled datasets like Quora Question Triplets and Natural Questions at around ~100,000 pairs each. I highly recommend checking out this full list, which can be found here.

The appeal of Weakly-Suppervised or Self-Supervised learning techniques​

The list of datasets from the 1B training pairs challenge illustrates the appeal of Weakly Supervised or Self-Supervised Learning techniques. To contrast, Natural Questions is one of the larger Supervised datasets for the Question Answering Task. Natural Questions (NQ) requires humans to derive questions given a Wikipedia context as input. As a result of this slow process, the dataset contains 100,231 question-context-answer tuples… Which is quite impressive, but much smaller than the ~730 million pairs extracted from Reddit without human intervention.

Large-scale and expensive models can achieve remarkable abilities with datasets like 730 million Reddit conversations. However, if we are constrained to the average ~22 million parameters in Sentence Transformers, and are using Weaviate for a general question-answering app, the 100,000 examples in Natural Questions will produce a better model than Reddit conversations for that particular use case.

So with respect to Scale, we generally want as much data as possible. But if we are getting the data from noisy sources like Internet conversation threads, it’s probably not worth the cost of scaling it up.

Modality is one of the most exciting emerging trends in Deep Learning that would be a shame to leave out of this discussion. Models such as DALL-E, which generates unbelievable images from text prompts, or CLIP, that searches through massive scales of images with natural language interfaces, have captured our imagination about the future of Deep Learning. Readers may be happy to know that the Sentence Transformer library has support for CLIP models.

Deep Learning research has mainly been focused on Text, Image, and Image-Text modality combinations, but this space is quickly emerging with successes in Video, Audio, Proteins, Chemicals, and many more. I am particularly captivated by Text-Code multimodal spaces and the opportunities of this modality combination plugged into the features of Weaviate's Vector Search Engine.

To recap, the HuggingFace Sentence Transformer checkpoints mostly differ in the data they were trained on. Picking the model that best aligns with your use case is a matter of identifying the most similar Domain and Task, while mostly welcoming additional scale in the dataset size. Most applications of the Weaviate Vector Search Engine that involve Sentence Transformers are mostly concerned with Modalities of Text, Image, or Image-Text space, but the number of these categories seems likely to explode in the near future.