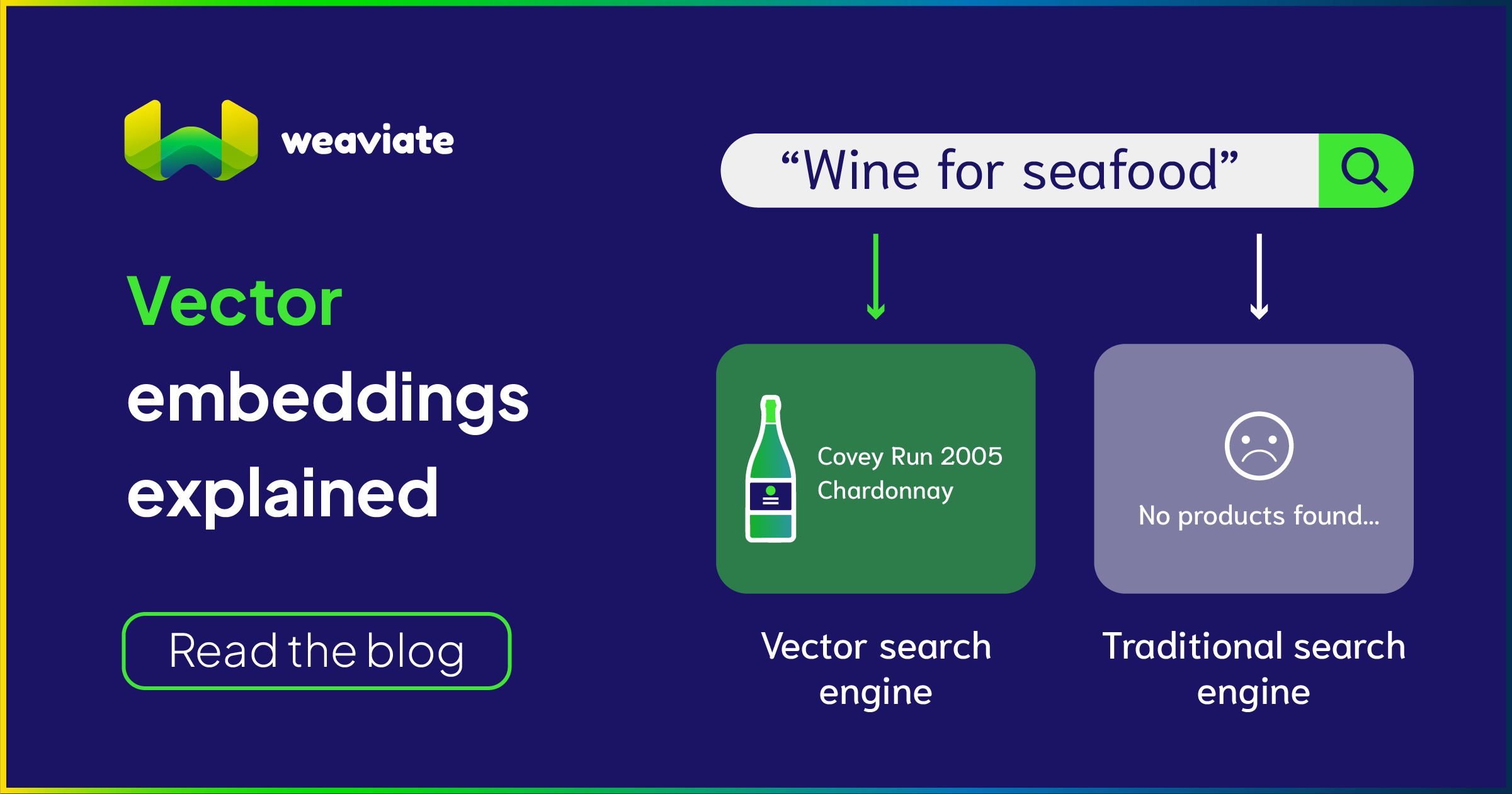 One of the most common use cases for Weaviate is to perform semantic searches, for example using the hybrid, nearText, or ask operators. If you’ve ever wondered how that works under the hood, this article is for you. 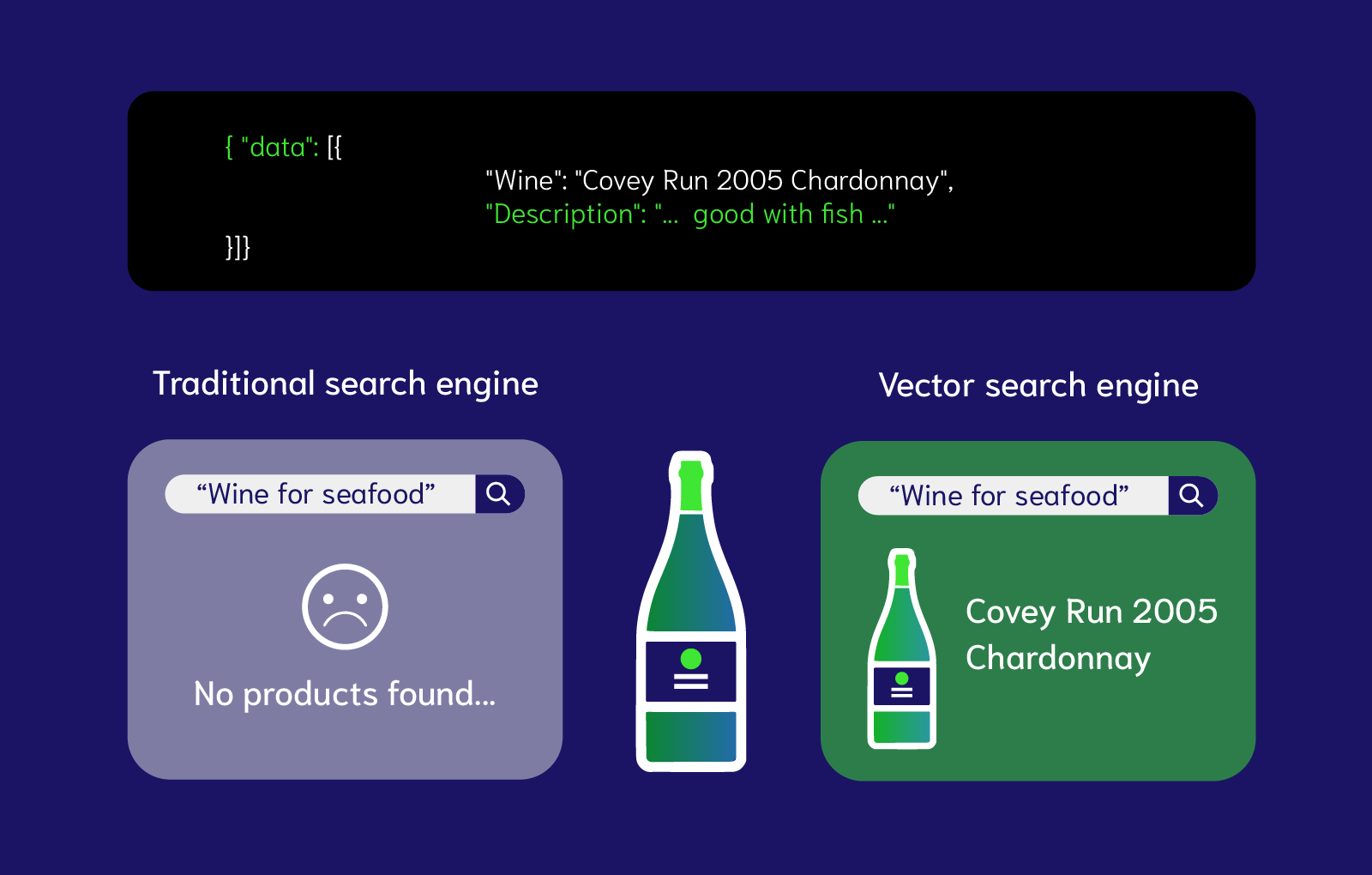 Semantic searches (as well as question answering) are essentially searches by similarity, such as by the meaning of text, or by what objects are contained in images. For example, consider a library of wine names and descriptions, one of which mentioning that the wine is “good with fish”. A “wine for seafood” keyword search, or even a synonym search, won’t find that wine. A meaning-based search should understand that “fish” is similar to “seafood”, and “good with X” means the wine is “for X”—and should find the wine.

How can computers mimic our understanding of language, and similarities of words or paragraphs? To tackle this problem, semantic search uses at its core a data structure called vector embedding (or simply, vector or embedding), which is an array of numbers. A vector search engine like Weaviate will compute an embedding for each data object as it is inserted or updated into the database. The embeddings are placed into an index, so that the search engine can quickly find the closest vectors to a given vector that will be computed for the query.

What exactly are vector embeddings?​

In practice, vectors are arrays of real numbers, of a fixed length (typically from hundreds to thousands of elements), generated by machine learning models. The process of generating a vector for a data object is called vectorization. Weaviate generates vector embeddings using modules, and conveniently stores both objects and vectors in the same database. For example, vectorizing the two words above might result in:

These two vectors have a very high similarity. In contrast, vectors for “banjo”, or “comedy” would not be very similar to either of these vectors. To this extent, vectors capture the semantic similarity of words.

Now that you’ve seen what vectors are, and that they can represent meaning to some extent, you might have further questions. For one, what does each number represent? That depends on the machine learning model that generated the vectors, and isn’t necessarily clear, at least in terms of our human conception of language and meaning. But we can sometimes gain a rough idea by correlating vectors to words with which we are familiar.

Vector-based representation of meaning caused quite a stir a few years back, with the revelation of mathematical operations between words. Perhaps the most famous result was that of

It indicated that the difference between “king” and “man” was some sort of “royalty”, which was analogously and mathematically applicable to “queen” minus “woman”. Jay Alamar provided a helpful visualization around this equation. Several concepts (“woman”, “girl”, “boy” etc.) are vectorized into (represented by) an array of 50 numbers generated using the GloVe model. In vector terminology, the 50 numbers are called dimensions. The vectors are visualized using colors and arranged next to each word: 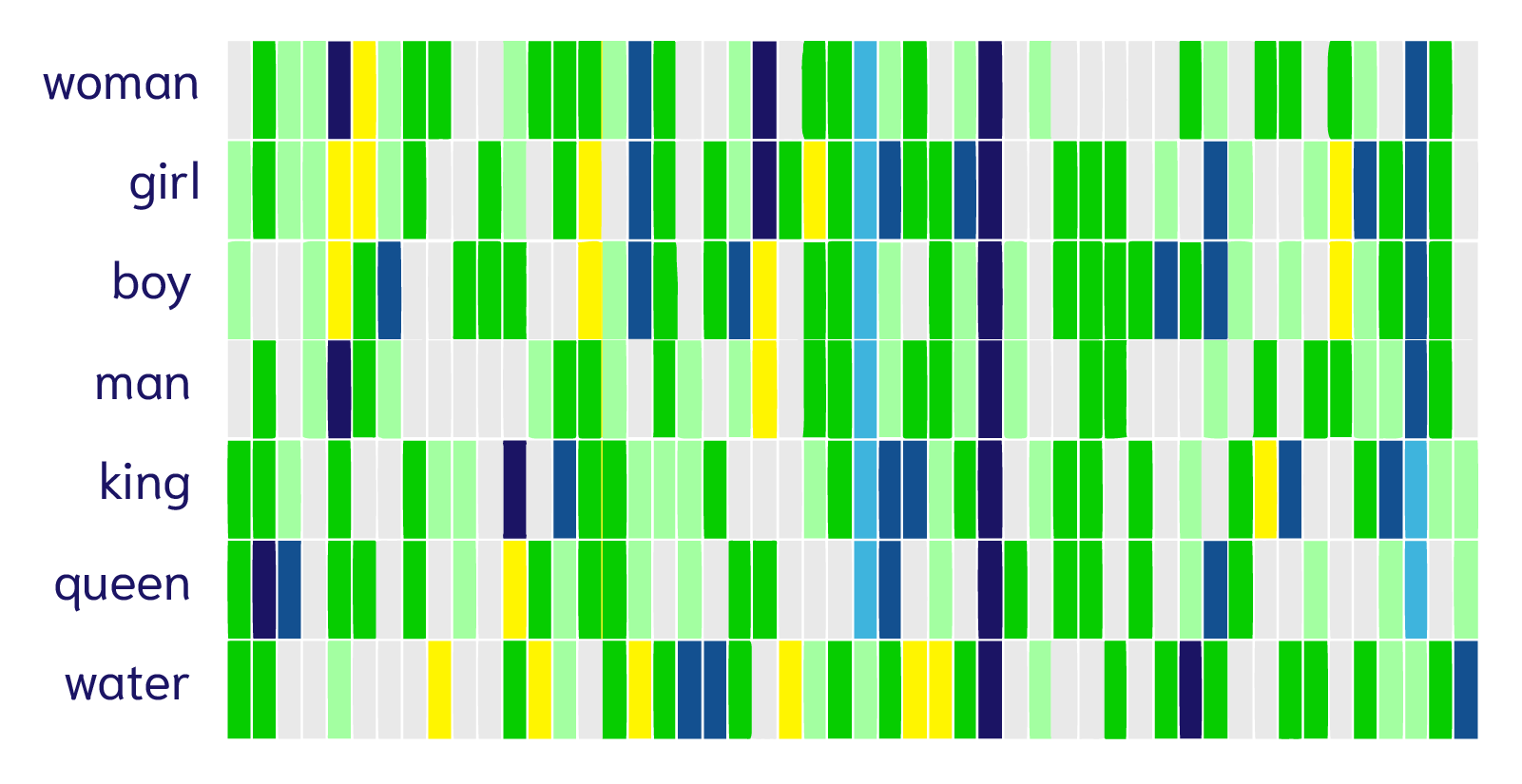 We can see that all words share a dark blue column in one of the dimensions (though we can’t quite tell what that represents), and the word “water” looks quite different from the rest, which makes sense given that the rest are people. Also, “girl” and “boy” look more similar to each other than to “king” and “queen” respectively, while “king” and “queen” look similar to each other as well.

In fact, effective vector embeddings can be generated from any kind of data object. Text is the most common, followed by images, then audio (this is how Shazam recognizes songs based on a short and even noisy audio clip), but also time series data, 3D models, video, molecules etc. Embeddings are generated such that two objects with similar semantics will have vectors that are "close" to each other, i.e. that have a "small" distance between them in vector space. That distance can be calculated in multiple ways, one of the simplest being "The sum of the absolute differences between elements at position i in each vector" (recall that all vectors have the same fixed length).

Let's look at some numbers (no math, promise!) and illustrate with another text example:

A set of simplistic vector embeddings (with only 5 dimensions) for the objects and the query could look something like this:

If we look at each of the 5 elements of the vectors, we can see quickly that cat and dog are much closer than dog and apple (we don’t even need to calculate the distances). In the same way, fruit is much closer to apple and strawberry than to the other words, so those will be the top results of the “fruit” query.

But where do these numbers come from? That’s where the real magic is, and where advances in modern deep learning have made a huge impact.

How are vector embeddings generated?​

The magic of vector search resides primarily in how the embeddings are generated for each entity and the query, and secondarily in how to efficiently search within very large datasets (see our “Why is Vector Search so Fast” article for the latter).

As we mentioned, vector embeddings can be generated for various media types such as text, images, audio and others. For text, vectorization techniques have evolved tremendously over the last decade, from the venerable word2vec (2013), to the state of the art transformer models era, spurred by the release of BERT in 2018.

word2vec is a family of model architectures that introduced the idea of “dense” vectors in language processing, in which all values are non-zero.

Word2vec in particular uses a neural network model to learn word associations from a large corpus of text (it was initially trained by Google with 100 billion words). It first creates a vocabulary from the corpus, then learns vector representations for the words, typically with 300 dimensions. Words found in similar contexts have vector representations that are close in vector space, but each word from the vocabulary has only one resulting word vector. Thus, the meaning of words can be quantified - “run” and “ran” are recognized as being far more similar than “run” and “coffee”, but words like “run” with multiple meanings have only one vector representation.

As the name suggests, word2vec is a word-level model and cannot by itself produce a vector to represent longer text such as sentences, paragraphs or documents. However, this can be done by aggregating vectors of constituent words, which is often done by incorporating weightings such that certain words are weighted more heavily than others.

Which takes us to the next, state-of-the-art, models.

Transformer models (BERT, ELMo, and others)​

The current state-of-the-art models are based on what’s called a “transformer” architecture as introduced in this paper.

Transformer models such as BERT and its successors improve search accuracy, precision and recall by looking at every word’s context to create full contextual embeddings (though the exact mechanism of BERT’s success is not fully understood). Unlike word2vec embeddings which are context-agnostic, transformer-generated embeddings take the entire input text into account—each occurrence of a word has its own embedding that is modified by the surrounding text. These embeddings better reflect the polysemantic nature of words, which can only be disambiguated when they are considered in context.

Some of the potential downsides include:

Despite these downsides, transformer models have been wildly successful. Countless text vectorizer models have proliferated over the recent past. Plus, many more vectorizer models exist for other data types such as audio, video and images, to name a few. Some models, such as CLIP, are capable of vectorizing multiple data types (images and text in this case) into one vector space, so that an image can be searched by its content using only text.

For this reason, Weaviate is configured to support many different vectorizer models and vectorizer service providers. You can even bring your own vectors, for example if you already have a vectorization pipeline available, or if none of the publicly available models are suitable for you.

For one, Weaviate supports using any Hugging Face models through our text2vec-hugginface module, so that you can choose one of the many sentence transformers published on Hugging Face. Or, you can use other very popular vectorization APIs such as OpenAI or Cohere through the text2vec-openai or text2vec-cohere modules. You can even run transformer models locally with text2vec-transformers, and modules such as multi2vec-clip can convert images and text to vectors using a CLIP model.

But they all perform the same core task—which is to represent the “meaning” of the original data as a set of numbers. And that’s why semantic search works so well.

Weaviate is open-source. You can follow the project on GitHub. Don't forget to give us a ⭐️ while you are there.